Real product innovation deserves cutting-edge packaging to support it, as the folks at Burlington, Ont.-based craft brewer Nickel Brook Brewing Co. have done with two of their specialty beers basking in international acclaim.

As bronze-medal winners in this past summer’s U.S. Open Beer Championship competition in Ohio, the company’s wittingly-named Peach Uber Summer Bear and Kentucky Bastard Imperial Stout are a testament to the company’s insatiable thirst for innovation and excellence in all aspects of it business.

“With the Peach Uber beer, we wanted to wanted to elevate the beer to the same status as wine and spirits,” says Nickel Brook’s manager for corporate sales and marketing Matt Gibson, pointing out that this year’s U.S. Open was the biggest competition in the vent’s history, featuring over 6,300 different beers representing some 117 beer styles.

Packaged in dark-tinted glass 500-ml glass bottles custom-made for the brewer by Phoenix Packaging, Inc. and decorated with a stylish label created by local designer Dan Brandon, The Peach Uber—launched across Ontario at the province’s LCBO (Liquor Control Board of Ontario) stores this past summer—placed third in the competition’s Berliner-Style Weisse category.

Described as a “sparkling sour wheat ale is brewed with fresh peach puree, expressing a fresh summer peach aroma with an effervescent and tart finish,” the Peach Uber is a good example of “pushing the boundaries of what beer can be,” according to Gibson.

“It is a naturally-produced high-quality beer with real fruit that deserves a place at any table,” Gibson says.

“Napoleon once referred to the Berliner Weisse style as the ‘Champagne of the North,’ and we wanted to bring that idea back—partly by using outstanding packaging to present it.” 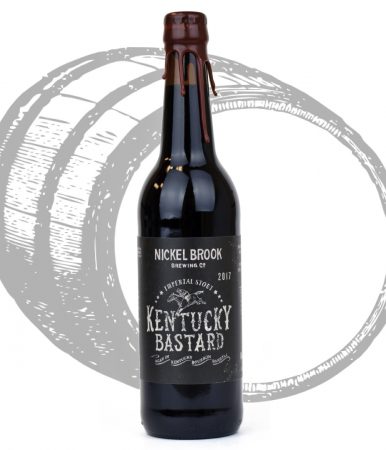 With a third-place finish in the U.S. Open’s the Wood/Barrel-Aged Strong Stout category, the Kentucky Bastard is set for a province-wide launch later this winter, says Gibson, crediting local designer Walter Leipurts for creating an authentically agedlooking label depicting a Kentucky Derby rider on a galloping horse.

“With the barrel-aged beers, we want to project a more rustic, rugged air, while still driving home the quality and tradition behind it,” says Gibson, citing the application of melted wax streaking down the dark bottle’s crown. The wax is applied by hand, in-house, to create a better seal and to prevent oxidation of the beer,” Gibson states.

“We do this on all our higher-end barrel-aged beers, as they can be aged in a cellar just like wine.”

According to Nickel Brook, the Kentucky Bastard Imperial Stout is distinguished with “has rich chocolate, coffee and dark fruit f lavors, combined with a vanilla and oak warmth from being aged in bourbon barrels for a full year.”

Says Gibson: “Winning awards for doing what we love to do is always a good day.

“Our team works hard to make innovative, artisanal beers,” he states, “and we are very honored to have them recognized against so many great competitors.”